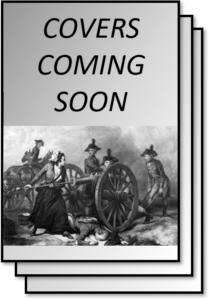 In A Lady’s War, Trent moves her heroines from Europe to Colonial America, where women worked side-by-side with their menfolk, and widows frequently took over the husband’s businesses.  The trilogy looks at the most important era American history through imaginary characters involved in some of the well-known—as well as many of the unusual—events of the day.  These events range from 1767, shortly before the Boston boycotts began, through 1787, when the U.S. Constitution was signed.  The heroines’ stories will create not so much a straight timeline series of the American Revolution, but a woven-together fabric of the lives of women who worked, loved, and fought their way through these tumultuous two decades.

In Charleston, South Carolina, Isabel Templeton is the widow of a wealthy rice planter who died in the French and Indian Wars.  It has all worked out thus far, for Isabel’s reputation for business shrewdness far exceeds that of her late husband, and her wealth is growing in her trade with Great Britain’s East India Trading Company.  However, those fortunes are soon to be reversed, and all of Isabel’s smarts may not be enough to prevent tragedy, especially when one of her daughters embarks on a foolish affair with a man who desires nothing but disaster for the Templetons and is determined to see it happen.

In Williamsburg, Virginia, Hester Caldwell’s husband has just lost his leg in an accident inadvertently caused by her father, who has been wandering in his mind the past few years.  Now, Hester is faced not only with serving as tavernkeeper without her husband’s help, but with managing her husband’s rage against her father.  When Hester’s young son begins spying on the men who meet inside her tavern and repeating what he hears to the old man, she finds herself in a tankard of trouble…for her father is babbling mindlessly to anyone who will listen about the seditious talk occurring inside her establishment.  Hester will learn that her mortal enemy might be the man who shares her name.

In Annapolis, Maryland, Phoebe Morris has buried eight children and has just buried her husband.  With nothing left to lose, she applies to the colonial government to retain her husband’s position as the colony’s currency printer in her own right.  To her surprise, she is granted this position.  But she may end up in a noose when a counterfeiting ring is unearthed, and it leads authorities straight to her press.

In Philadelphia, Pennsylvania, Liesl Uhrmacher is the daughter of a watchmaking family that has emigrated from Germany.  Her father and the fiery Lutheran pastor, Henry Muhlenberg, are fast friends, and Henry’s patriotic influence soon has the Uhrmachers involved in seditious acts.  When Liesl finds herself caught between her devotion to radical principles and the affections of a gentle loyalist who offers her his hand and a peaceful existence, she discovers that deception may be the most practical way to have everything she wants, but it is also the surest way to lose it all.

Moving between Boston and New York City is Mercy Allen, a wigmaker who wants nothing more than to be left alone to ply her trade.  But the tides of conflict will leave no one in peace, and Mercy learns that even her beloved new husband, Daniel, may not be who he seems.  When she is talked into using her wigmaking skills in ways she’d never imagined in order to help Colonel Washington on the eve of the Battle of New York, Mercy realizes that she is not who she seems to be anymore, either.

Mattie Lamb is both Mercy’s slave and friend.  Freed by Mercy, but quickly scooped back into bondage by unscrupulous slavers, Mattie is dragged through the slavery market in Newport, Rhode Island, before finally being transported to the Templeton plantation in Charleston.  There, Mattie makes an innocent decision that turns her already brutalized world upside down.

Impeccably researched, the lives of these women find them sometimes intertwining with one another, sometimes interacting with some of the important figures of the day, such as George Washington, the Adams cousins, Alexander Hamilton, and John Hancock; as well as with lesser-known but equally important figures like Hercules Mulligan, Washington’s most valuable spy; and Nathan Hale, whose role as a “spy” is largely misunderstood.

Although her previous books have been set in France and England, Trent has lived most of her life in Virginia and Maryland, the center of Colonial America.  She currently makes her home in St. Mary’s County, Maryland, the site of Maryland’s first capitol, and embarks on regular research trips to locations like Colonial Williamsburg, which is a treasure trove of information on 18th century professions and living conditions.